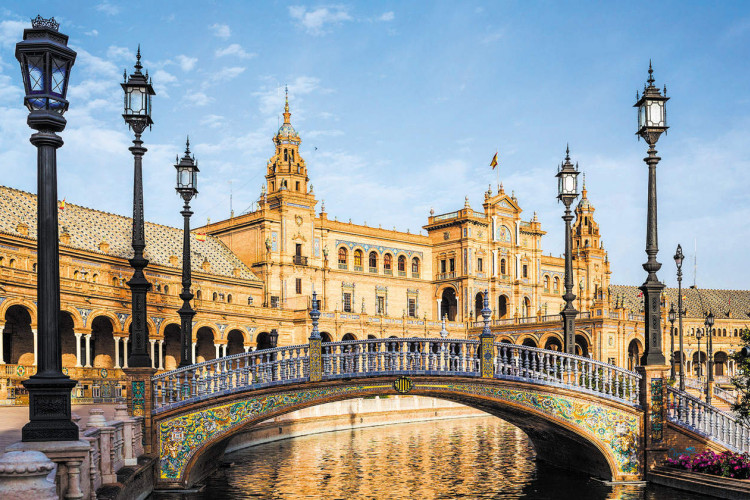 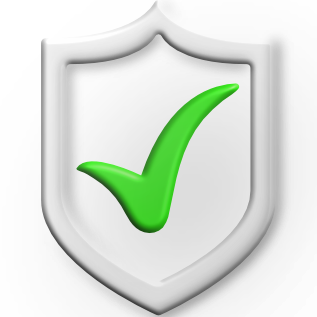 Explore Andalucia's magical cities and historical towns and feel the spirit of flamenco on this superb touring holiday through Spain’s most beautiful region.

If any one place comes close to rolling together everything that's quintessentially Andalucian, it's Seville. Seville has elegant plazas, a mixture of Moorish and Gothic architecture, colourful gardens and fiery flamenco!

Cordoba's period of greatest glory began in the 8th century after the Moorish conquest, when some 300 mosques and innumerable palaces and public buildings were built to rival the splendours of Constantinople, Damascus and Baghdad.

Nestling below the snow-capped Sierra Nevada mountains, Granada is one of the loveliest cities in Spain. It was the last Moorish city to fall to the Christians, in 1492. This Andalusian city is justly proud of its spectacular location, its long history and for the richness of its Moorish architecture, which is equal to anything in North Africa.

Gibraltar stands on the European side of the narrow straits that separate Europe from Africa and the Mediterranean from the Atlantic. Although a cosmopolitan mixture of several cultures it remains determinedly British - Gibraltar has been British since 1704 and is a Crown Colony. 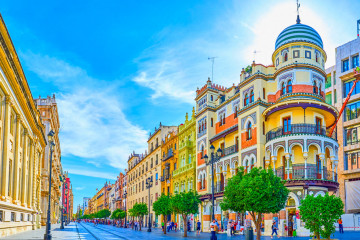 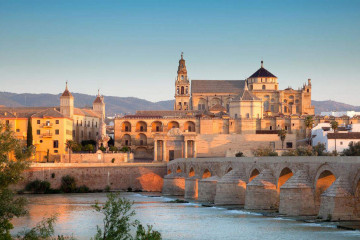 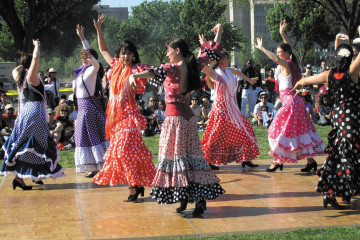 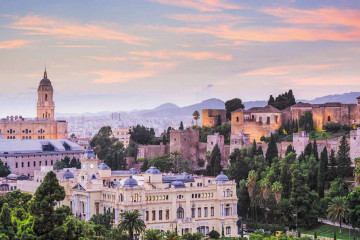 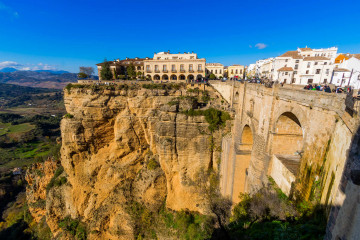 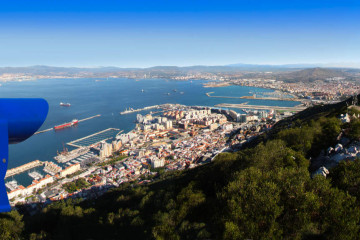 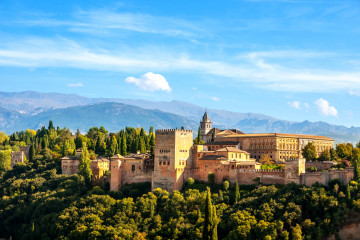 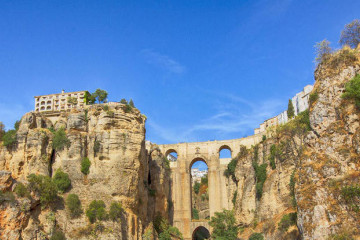 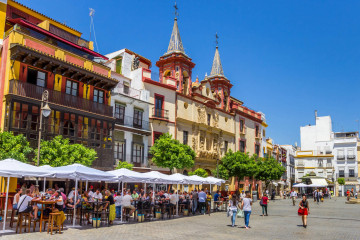 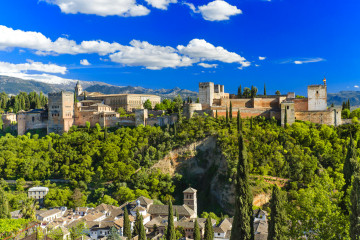 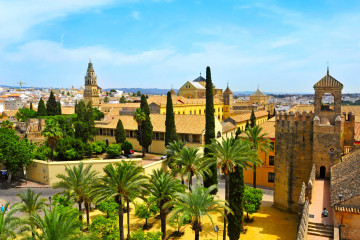 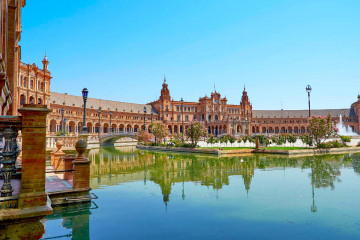 Hotel facilities include bar and restaurant and all bedrooms have en-suite bathroom, telephone and TV.

Please note that on some dates or with high demand, we may use other four star hotels. 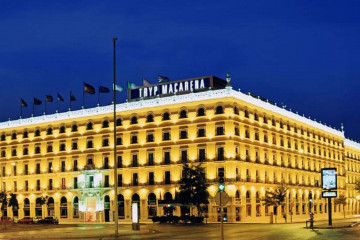 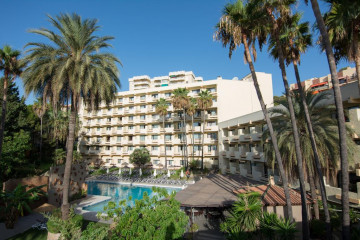 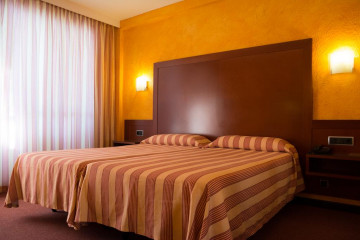 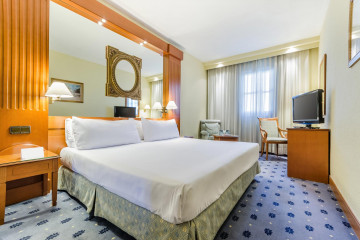 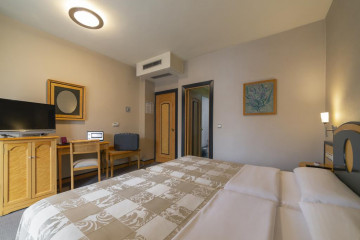 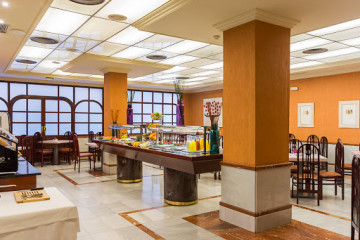 Our holiday begins with the flight to Malaga where you will be met by our representative for the short transfer to our hotel in the Benalmadena area for an overnight stay.

This morning we drive to Ronda, a picturesque clifftop town which is spectacularly situated 600 feet above the El Tajo gorge. The gorge is spanned by the 18th century Puente Nuovo Bridge, from where you can peer down to the river far below. Across the bridge, where an elegant cloistered 16th century convent is now an art museum, Old Ronda or ‘La Ciudad’, has cobbled streets lined with elegant town mansions. Ronda also has one of Spain’s oldest bullfighting rings, Plaza de Toros. After our visit we continue our journey, passing typical, quaint whitewashed Andalucian villages and on to the Andalucian capital, Seville, where we stay for the next two nights.

Our panoramic sightseeing coach tour this morning shows us some of the city’s main highlights including the Tobacco Factory, which was the setting for the first act of Bizet’s opera Carmen, the imposing 12th century Alcazar Royal Palace, the Plaza De Espana, the Tower of Gold and the magnificent Cathedral, the third largest in the world and which houses the tomb of Christopher Columbus. After our tour the afternoon is at leisure, giving an ideal opportunity to perhaps stroll through the old Barrio Santa Cruz, the Jewish quarter which is located around the Cathedral, or take a sightseeing cruise on one of the river boats, to see this beautiful city from a different perspective. This area is filled with small winding streets and is generally regarded as the most charming part of the city.

This morning we travel further into the heart of Andalucia, to the city of Cordoba. We will have a walking tour through the beautifully preserved historical centre, which is a UNESCO World Heritage Site, and along the ‘Street of Flowers’ to the 1,000 year old Mosque of the Celiphs. Following our visit we continue our journey through the scenic Andalucian countryside and on to the historic city of Granada, situated at the foot of the magnificent Sierra Nevada mountain range, for a two night stay.

This morning we have a sightseeing tour of the ‘must see’ attractions of this magnificent city including the Royal Chapel, where the Catholic Monarchs Ferdinand and Isabella are buried and the cathedral built on the site of the former mosque. After the coach tour the rest of the day is then free to explore Granada at your own pace with its colourful Moorish Quarter, lots of fascinating shops, ice cream parlours and pavement cafes or perhaps take the opportunity to visit the Alhambra Palace. Dinners are not included in Granada, giving an ideal opportunity to dine in local restaurants or traditional tapas bars, and afterwards perhaps take in an authentic Flamenco show.

Leaving Granada behind, today’s journey is full of amazing scenic contrasts as we drive through the Sierra Nevada mountains and down to the coast. We’ll make a stop in one of the traditional villages of whitewashed houses in the Alpujarras region, where we'll visit a farm where the local Jamon Iberico - air dried ham - is cured, where we'll have a tasting. Staying in the mountains we'll stop at another village and have an included "Tapas" lunch with a glass of the local wine - you might sample dishes such as boquerones, bravas patatas, croquetas de jamon and calamares - before continuing on to the Mediterranean Sea on the Costa Tropical. We then drive along the Costa Tropical and on to our hotel on the Costa del Sol, where we stay for two nights. Dinner this evening is included at the hotel.

Today we have a fascinating excursion to Gibraltar, where it’s like stepping back in time to a Britain of 40 years ago. In Gibraltar, the past is a living reality - colourful ceremonial events such as the Changing of the Guard and the Ceremony of the Keys are performed exactly as they have been for centuries. When you first see the Rock of Gibraltar, you cannot fail to be impressed by its stature, towering above the surrounding countryside. At ground level, Gibraltar consists of a narrow peninsula linked to the north to the Iberian Peninsula by a narrow, sandy isthmus. The Rock takes up much of Gibraltar and is home to the famous Barbary Apes. On a clear day from the summit of the Rock, which is easily reached by cablecar, you can see across the Strait of Gibraltar to the Rif Mountains in Africa. The Eastern side is made up of sheer cliffs, reaching a height of 426 metres, whilst the western slopes are gentler and much of its lower half is taken up by the city. In the city centre you can stroll along Main Steet with its blend of British highstreet and local independent shops, and restaurants serving everything from traditional roast beef and fish and chips to fresh, Mediterranean seafood and tapas. Dinner this evening is included at our hotel.

Today, at the appropriate time, we transfer to Malaga airport to take the return flight to the UK.